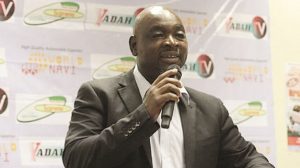 Willard Manyengavana, the chairman of IFA Northern Region  has died.

He collapsed during a gym session at Colcom gym this morning.  He fell in the gym doing during an aerobics class and was rushed to the Avenues Clinics where he was pronounced dead.

Manyengavana was part of the Premier Soccer League executive and became Caps United team manager and board member before assuming the leadership position at IFA Northern Region.